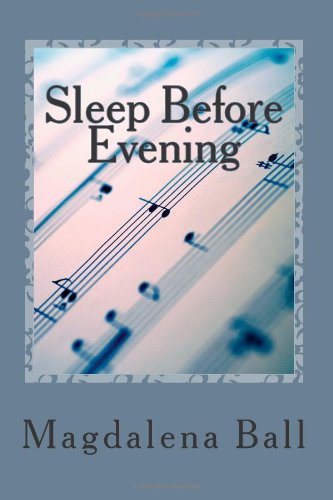 Sleep Before Evening
by Magdalena Ball

Sleep Before Evening is the story of a brilliant young woman who, after experiencing a death in the family, abandons the promise of her academic career for a desperate search within herself. Her new life is immersed in the dark side of New York, in all its squalor, booze, drugs, sex, violence, poetry, and original music. Despite the dangers, she braves morass for its stimulating freedom, and the opportunity to burrow underneath the layers of her life and uncover the inner pain that hurts so badly. Sleep Before Evening was a finalist in the 2008 Next Generation Indie Book Awards, and was a 3 year running winner of the MyShelf Noble Prize.

“Magdalena Ball demonstrates her mastery of the musicality of language and many scenes are imbued with striking imagery…As the drama coils tighter and tighter, it is this quality of writing that keeps the reader utterly glued.” ~Cathy Biribauer

Click on the book cover to buy a copy of obtain a free sample.

“The dialogue is solid and believable, and the characters live and breathe and scratch themselves. The drug scenes and the horrors of dependence are especially well-rendered, but the story is ultimately uplifting and optimistic. It is a triumph of the soul. Read this book.” Chad Hautmann

“As the drama coils tighter and tighter, it is the exquisite quality of writing that keeps the reader utterly glued. As Marianne struggles with her demons and we almost hold our breath as she nears her eighteenth birthday, Magdalena Ball’s Sleep Before Evening shows us that in order to find yourself, you sometimes have to lose yourself first.” Cathy Biribauer, for The Rose and Thorn

“Marianne is taking the death of her grandfather very hard. Her mother seems to have gotten over the death too fast for Marianne, it appears all she cares about is the current man in her life. Soon Marianne finds her life spiraling out of control. As she faces the unthinkable she ends up in a situation that no straight A (good) student should ever have to face. And she must face reality and her Mother. Fantastic read. Sleep Before Evening kept me up late into the night. There is so much more I would like to say, but I never write spoilers. I am quickly becoming a fan of Magdalena Ball!” Sheri A. Wilkinson

“Take one high school senior teenager, Marianne, mix in loss of grandfather due to removing life support system, one mother who borders on the dramatic and acting childish, plus one father who hasn’t seen his daughter in ten years plus a stepfather who erroneously leaves the childish mother and you get a complete emotional and psychological breakdown of a seventeen year old daughter. “Sleep Before Evening” is a teenage angst novel that all parents should be required to read. Life has a way of getting past you without you ever noticing that time doesn’t stand still, it keeps on trucking. I recommend “Sleep Before Evening” 4 stars. A good explanation for what can hurt your children when you sleep walk through life.” L.S. Cauldwell

“Magdalena Ball’s first novel, Sleep Before Evening, is required reading for aficionados of the school of confessional writing. While the book is empowered by its conspicuously female perspective, it somehow manages to transcend the boundaries of gender and force-feeds the reader with doses of a reality much harsher than the beatific title suggests. Ball employs the rare literary voice capable of juxtaposing harrowing experience and work-a-day home life. She accomplishes this rare feat by traversing twin avenues of approach, 1) a deceptively mundane accounting of family events and, 2) a deliberate fracturing of sensibilities unique to, well . . . a David Lynch film. This reviewer recommends that you procure yourself a copy of this minor masterpiece while it is still available as a first edition.” Harry Hughes