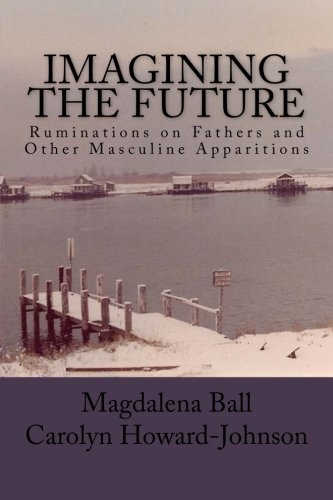 Click on the book cover to purchase or for samples.

“In lyrical fashion, Ball and Howard-Johnson prove that fathers are more than just the  pipe-smoking Fathers Knows Best or the hapless all-thumbs caricatures of modern sitcoms. Their poetry and images are in our DNA and our hearts.” ~Kristin Johnson

“It’s easy to remember our mother’s, but sometimes our fathers, perhaps more distant, slip into the past. I loved this collection. Carolyn Howard-Johnson and Magdalena Ball bring back those precious moments with fathers. In the images, you feel the silent memories and see glimpses of the fathers these daughters remember. I particularly loved Carolyn short poem, “Remembered for His Smile.” It could have been about my father except he smoked cigars. A line from “Father Earth” in Magdalena Ball’s collection resonated with me, “it’s hard to be a father these days.” It is hard to be a father, so it’s especially important to take time to think about those important men in our lives.” Nancy Famolari

“In Imagining the Future: Ruminations on Fathers and Other Masculine Apparitions, authors Magdalena Ball and Carolyn Howard-Johnson dig deep into their thoughts of fathers through their memories of their own and the ages in which they lived. They are metaphorically remembered through music and nature. In “Long Before they Shut the Napster Down, Howard-Johnson recalls the music of her father compare to today’s downloads:

my father collected blursounds
get out of town
downloaded into the night soft jazzy
lights, sweet pink smoke
the smell of Jack Daniel’s hot
satin doll
to real applause, nothing canned

She compares the fake applause of today against the real applause of her father’s time. She juxtaposes one era with another, showing relationships and individual character in just a few well-chosen words.

She shows coming and going and an inability to keep up with the image that is her father.

Both women write gems. They use metaphor, memories and history to weave vibrant images of the men in their lives. Imagining the Future is a wonderful read that may make you conjure up your own memories.” Mindy Lawrence

“Carolyn Howard-Johnson and Magdalena Ball have woven their Imagining the Future: Ruminations on Fathers and Other Masculine Apparitions (Volume 1) in March 22, 2010 together like sisters. Carolyn begins her medley of childhood memories beginning with “All the sound in the world sucked to a waving wailing note as I perch on my father’s knee.” Later giftedly pondering, “The things I didn’t know about my father, his coming and goings, the fearing he would not return. One day, only a dawn or decade ago, he didn’t.”

“Then, then!” writes Carolyn, “Decades of dread (conflicts?) with names we remember and some we don’t. Bosnia, Kosovo, First (!) Gulf War, Korean, Bay of Pigs, Rwanda, Afghanistan, the Berlin Crisis for god’s sake. More than 300 of them, words
like the bass beat of drums. Vietnam when those troops who did come home couldn’t walk or wouldn’t talk. I tell my grandson, then only 12, how we who remember the grunt of that war see it differently from those who marched in the Double W Wars,
wars when we wanted to be there.”

Carolyn Howard-Johnson’s grandson served two tours in Iraq. Her husband is a retired Army officer who served in the 1960s Berlin call up. I can hear the sober sounds of the National Anthem in the background of all her poetry, with the throat voice of Uncle Sam warning, “I want him. He’s mine. You can’t have him!” All wives and little girls cry.

Magdalena pulls metaphors out of the air with, “You recede a little more. I reach for you over thought waves little girl’s hand hung in the air your absence, finally, matches reality to imagination trying to get truth from pretty metaphors that can’t touch your flesh still young somewhere while the precious science you drank like fine wine grinds your atoms to dust.”

Carolyn Howard Johnson and Magdalena Ball have written a wonderful little memoir celebrating Father’s Day and all their sacrifices as girls and women growing up in the 50’s and together they swam through a remembered past. I recommend this little gem and I give it Five Stars for Amazon. Happy Father’s Day to all…wives, children and our husbands who take care of our very basic needs while we write poetry.” Joyce White for Sculpting the Heart Book Reviews

“From the heroic to the mundane, the poems in this book are a beautiful tribute to all fathers. The imagery these two authors create with their words is profound and unique. Each poem took me to a new place and all sparked a vivid memory. These two gifted authors paint a vivid portrait on these pages. True magic.” Darcia Helle

“The fathers and father figures in our lives finally get treatment in poetry beyond angry abandonment rants. Carolyn Howard-Johnson and Magdalena Ball sketch portraits of military fathers and grandsons contemplating the Founding Fathers’ legacies lost on much of the youth, uncles whose bookshelves resemble ours, blind grandfathers who still see pigeons, fathers-in-law who use food as a character measuring stick, fathers who collect medleys of music blursounds, and daughters who sift science, maps and artifacts trying to decipher their fathers, and most of all, the chimaera or virtually-enhanced image of the father versus the real and sometimes painful human bond. Fathers inhabit dragonflies and give birth to cosmic phenomena. Ball and Howard-Johnson explore the spectrum of fathers, from the galactic and godlike to the poignantly microscopic details of daily life. In lyrical fashion, Ball and Howard-Johnson prove that fathers are more than just the pipe-smoking Fathers Knows Best or the hapless all-thumbs caricatures of modern sitcoms. Their poetry and images are in our DNA and our hearts.” Kristin J. Johnson

“Authors Magdalena Ball, and Carolyn Howard-Johnson open the doorway of memory through words echoing thoughts, and feelings on fathers that are so strong they can be touched and heard through voiceless memories that forever cling to us all. Words unspoken between parents and children are uttered in these poems of pain, love,and always truth.”  Kim McMillon, playwright, producer, and host of the blogtalkradio show
Writers’ Sanctuary.